The debut single from the shoegazers of New York, The Belltower.  Exploration Day was produced by House of Love legend Terry Bickers.  It was NME’s single of the week upon release, as it features the instantly recognisable Outshine the Sun. While their album concentrates on the vocal talents of Britta Phillips; in Exploration Day, Mark Browning takes the vocal duties in Beatnixon Blues and Solstice.  These are just as strong as the songs performed by Britta.  Thankfully Mark’s vocals are left intact when Solstice appeared on Popdropper. It has icy organ in the background.  Britta sings on Never Going Home, this song is described by some as beautiful and heartfelt, and by others as sounding a bit like Celine Dion.  I am firmly in the first camp of thought for this song. 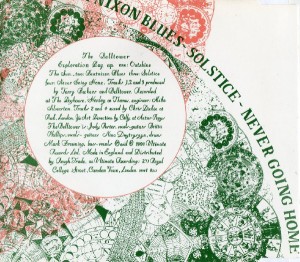 Although not strictly in the shoegazing scene, The Belltower are always associated with the genre. They were American, their music was upbeat and you could make out the vocals. So you can see why the jury’s out if they are shoegazers. I was fortunate enough to see them in the Chapterhouse, Five Thirty and The Belltower tour. In the excitement of the evening I couldn’t remember much about them. Only later on after getting the album I really appreciated them.

Popdropper is their only album and it thankfully showcases what The Belltower is all about. It is mainly
based around the talented vocals of Britta Phillips. Britta was the singing voice over of holographic cartoon female vocalist Jem which appeared in a cartoon series in 1985.  I do get transported back to 1985 in songs like Slipstream because she sounds so Kim Wilde.