Bennet formed in Reading in the Summer of 1993.  Peddling cheeky, upbeat indie, they picked up more and more local support slots, possibly assisted by the lead singer’s job at Virgin Records store in town.

1994 – Peak Britpop
Bennet increased their gigs and improved their onstage patter.  By 1995, they were signed to a record label and opened the second stage at Reading Festival 95.

1995 – Britpop in early decline, still selling
Bennet got signed at this point.

Now you’re thinking, so what? These are late period Britpop stalwarts, surely?
Odd I’ve never heard of them.

Except they were a Britpop sounding band. Who signed to Roadrunner.

Now, for the uninitiated Roadrunner Records began in 1980 and used to import US metal into Europe, becoming one of the largest heavy metal indie labels as the 90’s wore on, with key bands being Sepultura, Motorhead, Machinehead, Fear Factory, Biohazard, Sick of it all and Corrosion of Comformity. 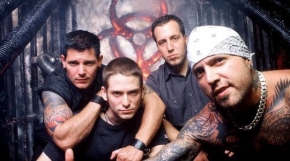 What could possibly go wrong?

Firstly, many of Bennet’s better songs were let down by imperfect production and pushed out as B sides.
The A sides were excellently produced by Marc Waterman (previously produced albums by Ride, Elastica and Ash).

The 1st album was also done decently by Wolsey White (who’d go on to produce Hard Fi’s better received stuff) with Phil Vinall doing later singles again just fine, but really that accounted for a quarter of material at a time when people were focused on end to end great EPs and singles (See Suede et al).

The B-sides, (where some of their best live songs like Polka, ‘Bennet have left the building and Hello, we are Bennet ended up) got mauled (seemingly in one long session by Patrick Hannan, with no production credits I can find before or after. Incidentally he seems to have been the drummer for the Sundays, of massive selling ‘Reading, Writing and Arithmetic’ fame).

This destroyed any possibility of Bennet being taken seriously. Blur had suffered similarly early on, but had kept the songs back enough – or just been lucky and had time to get better at writing so had more in the bag.

Bennet were always tight live along with being entertaining, energetic and even more fun. I saw them a number of times in the earlier days and never failed to be entertained, but the versions on singles were (and are) shocking; songs like Bennet have left the building a roaring beast of an indie tune with a fantastic chorus live, is done so badly you can only imagine you’re listening to a rough demo by mistake. The whole song is imbalanced, the drums are tinny, the guitars overloud and mewing, there’s no life in the performances and vocalist Jason sounds almost bored, like he doesn’t know this is the actual version and is doing a guide vocal.

Bennet did a peel session in 1996 (‘What a jolly noise they make to be sure’ enthused Sir John), which features two of the afflicted tracks; Polka and Jordan Bennet and an Evening session which had a version Hello, we are Bennet, and these tell the tale – making mincemeat of the released versions, showing flashes of well laid out backing vocals, the bands power and above all, the energy that marked the band out as such a live treat.

Anyway, the lesson was clear – buy a Bennet single and get dull tracks (apart from those on the album anyway).

I used to spend my Saturdays in a record shop in Ware and it was the devil’s own job to get hold of the Bennet singles despite knowing the staff. The singles almost seemed to start their shelf life in the bargain bin.

The rep literally didn’t seem to know what to do with the first single – used as he was to pushing metal records (Roadrunner had had the Prodigy ‘Experience’ and an Erasure album at some point, but those had been heavily trailed prior, needing little push) and said so.
To be fair, adverts duly appeared in the NME, no one seemed to have a bad word to say about their live performances, but with confused selling and cover artwork that was shockingly bad, a weedily coloured mess of cheap looking photos, by the time the album came around, few cared.

Bennet released Super Natural on the 2nd September, with Suede dropping ‘Coming up’ (to mixed reviews as they were coming to the end of their peak period and failing to break the US) the same month.

Super Natural is a wonderful album, chock full of great songs and it did well in reviews (7/10 in the NME) “they’ve always got a smile on their face and a song in their heart. And, in Bennet’s case, it’s nearly always a bloody great song.” (Mark Sutherland)

The lyrics were always a strength, something you really couldn’t say for so many indie bands of the time. Printed proudly on the inner sleeve of the debut album and quite obviously one of the reasons that, even as the light heartedness of the material gave fuel to lazy writers, the criticism was never that cutting. Some of the best songs that hadn’t been mauled on the singles fared well here, it’s a great album, but albums with one trick pony singles all over them and a confused promotion (and more dreadful cover art), it was never going to be a massive seller.

Still, as 1996 closed, no one would have been surprised if Bennet had been dropped. If anything I expected it myself – and I was a fan…

Early 1997: Britpop at this point = Spice Girls and was thus dead – and here come the dance acts…

And then, in February 1997 Bennet released Mums gone to Iceland. Presumably the last single.

Now I’ve no idea how much this took Roadrunner by surprise. Certainly they must have signed them for a reason and I’m doubting it was for my favourite song at the time Wanker (I was very immature for someone in their early 20’s, not much has changed)

It had a shockingly bad single cover even by the standards of the day. Literally the four of them standing in a white room with Jason drinking Orange Juice. The height of not trying on the labels’ part.

I don’t have any adverts for it, despite running up a website for them and having things like postcards, I’m not even sure it really got promoted…
Dead in the water, surely?

Now that’s not a massive hit it would seem. But back then getting in the top 40 meant something and for Bennet, everything. It meant radio play, it meant at least some people were interested and some were buying them.

So now Roadrunner have to give even a simple push, maybe this wasn’t such a failed experiment?

Noticeably some ads appeared and artwork on the follow up single improved a lot….but too little too late, a re-release of an earlier single wasn’t going to cut it with more woeful b sides and it slid in at 64.

Confused, Roadrunner must have felt compelled to do a second album. Because now, well, this lot have actually done something lots of indie bands – labouring in those days – hadn’t done with much bigger pushes and budgets.

Even to this day indie fans know Mums Gone to Iceland if they’re of a certain age/dedication.

But at the time not a lot happened. More touring, but without new material. And then, radio silence.

The recorded a second album. I saw them preparing for album 2’s release at London’s Water Rats venue. Fantastic, but still…Water Rats..it wasn’t up and the nicer supports (Carter USM being one of their biggest) weren’t forthcoming.

I Like Rock came out as lead single album, barely charting, but still charting…but too little too late, no one seemed to care – at least not enough.

And then somehow, they got a BBC 1 radio broadbast from a show in Exeter.

And in that radio show, a possible second hit, a secret weapon, a last gasp: Generation Pepsi.

A anthemic track, much more intricate, much bigger chorus – it showed a side of Bennet starting to learn how to do ‘bigger tracks’, bit of word of mouth…

Best showcased on that live gig broadcast by Radio 1, it had a great chorus and…

And then Pepsi got wind of it. They weren’t having it and I can’t imagine Roadrunner were going to push back, given the status of the band.

Generation Pepsi staggered, punch drunk, out of Roadrunner, renamed as Horses Mouth, some truly underwhelming production, more awful artwork (neon pink arrows anyone?) and very strangely adjusted lyrics even in the verse killing any chance of it doing well and indeed it didn’t.
The second album also waddled out, a few muted ads around the papers – but not much – this one had a decent opener, lots of energy, a few decent tracks scattered around the filler (typical ‘written on the tour’ stuff it struck me), but it wasn’t amazing (though again it garnered decent reviews).

So what has this taught us about what happens when a great little band sign to the wrong label?

So for now, sit back, relax and enjoy the best song Bennet had – even if it didn’t have the hilarious (to an immature 20 year old) sucker punch of Wanker

Karaoke is from the awesome Radio 1 Broadcast from Exeter, Wanker is from the tape given away at a Highbury Garage gig in 1996, SAGTF is the single version and Young, Free And Sorry is just..my favourite Bennet song.

I’d have put the Bennet Christmas single here but a) I don’t have it b) It’s not their best song. ;O)