I wouldn’t class myself as a Blur fan, but I do like the universally panned album Leisure.  Damon Albarn said that it was the worse album that they ever did, along with Think Tank.  Whether it was because it came out in the terrific year of 1991 and it brings back memories of that time.  Or it could be the indie snobbery that I have, ‘Blur were so much better before they were big.’ I am still not quite sure why I like this so much.

Even in 92 Blur were very small.  I saw them at Glastonbury that year, they were onstage at about 3pm with the chancers before the big acts came on.  Leisure is an album that more than nods its head towards the baggy Madchester scene.  It borrows heavily from The Stone Roses, Happy Mondays, Inspiral Carpets and mostly The Charlatans.  It was even said that Damon copied Tim Burgess’s haircut.  Listening to the album now the indie disco stalwart There’s No Other Way sounds like it is played slower than I remember. I am sure it was an intensely cathartic experience back in 1991, but it does sound less of an indie disco floor filler. Until it was pointed out to me I never realised that there was such a limited lyrical vocabulary in the album, ironically there is a song included called Repetition.

What is album does is takes all the best bits of Madchester and combine them, but unfortunately Blur have not settled on their image, so in retrospect, we get an outstanding Madchester pastiche. There is one song that rises above everything on the album and that is Sing, piano repetition and real band chemistry make this great.  This song feels like a very personal experience with Blur and I do not feel that they really achieved this intimacy again till Tender in 1999.

The Observer in 2003 they gave out a Blur exclusive freebie CD.  This has a collection of demos, acoustic and live tracks. It features a live version of Me, White Noise.

This has Phil Daniels from Quadrophenia performing a narration not unlike his performance on Parklife. The artwork on the cover is by the acclaimed street artist Banksy. Inside the cover I found a postcard that I could fill out to win tickets to see Blur perform in Barcelona. 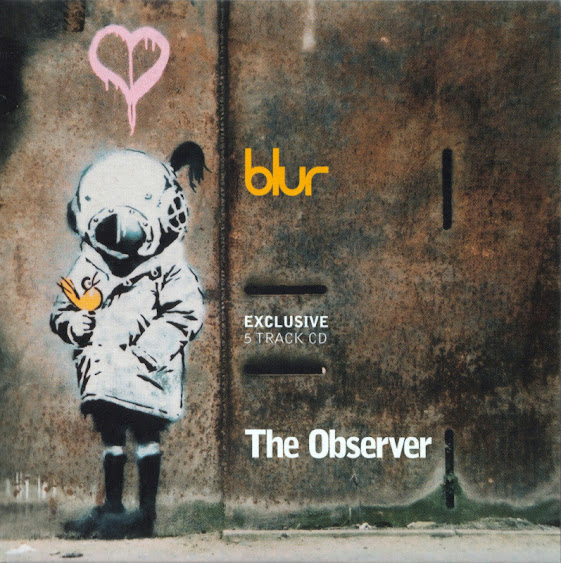