Unfortunately one of Jonathan King’s favourite bands and tipped by him for pop greatness. At the Great British Music Weekend King went to interview the duo, but rumour has it they hid in the dressing room.

Carter gigs were a spectacle and they had a relentless tour schedule, I must of seen them four times between 90-92. Their tour manager Jon ‘Fat Beast’ would appear topless in front of the audience at the start. He would whip the crowd up into a frenzy just before Carter would take to the stage. Strangely, Jon Fat Beast signed my ticket when I saw them at Bournemouth International Centre. I am not sure why I got it signed. I think that I joined a queue not realising what I was queuing for. It might not of been the Beast at all 92 is a bit of a blur.

Carter’s second album 30 Something is probably their most well known works. It starts o with a a sample of Rimmer from Red Dwarf. It is drenched in social comment. Bloodsport for All is about bullying in the British Armed Forces it was banned by the BBC. Sealed with a Glasgow Kiss tackles the issue of domestic violence. It has much more energy than you would expect. Considering that this is two men in their thirties; a drum machine, keyboards and guitar. 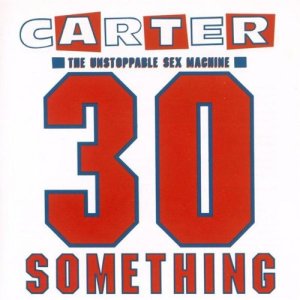