One of the latter Cud singles and still has all the quirky breezy things included that has made this band a consistent listen for the last two decades,  From the criminally unnoticed album Showbiz, the title track is easily one of my favourites.  Cud at their most melodic.  With Carl Puttnam’s vocals not leading, but accompanying the musical arrangement.  It is right up there with Robinson Crusoe and Hey Boots.

My Need to Hurry  is much more urgent, with snappy guitar riffs.  But the keyboards in the chorus give a more contented broader groove. The final track Ski Bum, is a thrashy breathless closer, giving William Potter, Steve Godwin and Mike Dunphy a chance to attack their instruments in this frenetic ender. This is the original CD single,  later versions had My Keyhole Don’t Keep Secrets Anymore included.

Sticks And Stones
My Need To Hurry
Ski Bum

A piece of indie folklore and holy grail.  When in Rome, Kill Me has been touted as the only indie rock opera and the NME described it as sounding as if it was recorded in a shoe box.  This is the debut album Cud and released through Imaginary Records.

The first seven songs are linked by short narrative segments that tell a tale of crime and deception.  The story is narrated by Cud’s drummer Steve Goodwin’s landlord John Farrell and Elizabeth Cuthbertson.  The songs do sound a bit rough, and scratchy.  The mixing is a bit quiet and can be murky, but Carl Puttnam’s distinctive voice shines through.  The Cud quirky humour is already completely developed this is shown in the track Only (A Prawn in Whitby)

This song was supposedly inspired by a chance encounter by Cud’s manager with Morrissey.  The vegetarian Smiths frontman was tucking into a king prawn in a Whitby Chinese restaurant.  This story is now believed to be untrue.

Cud : When In Rome, Kill Me

When In Rome, Kill Me 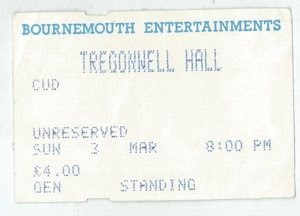 Cud were my first experience of going to watch a band. Not exactly shoegazing stuff but it was a good first time.

They had a novelty band label that that held them back. This was partly due to Hot Chocolate and Jethro Tull covers. The ‘drummer from Cud’ was tagged as a Keith Moon for a generation, but the NME used the tag as the epitome of obscurity. I was so impressed that I brought a ‘Magic’ t-shirt.

For those who don’t know; DLERC are like (but not exactly like) the initials of one of Carl Puttman’s former girlfriend. Maybe the song is not exactly about her? Or maybe DLERC fits the lyrics better. 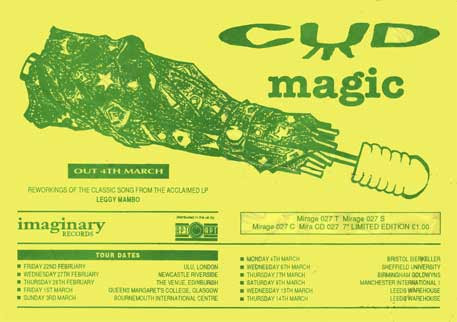 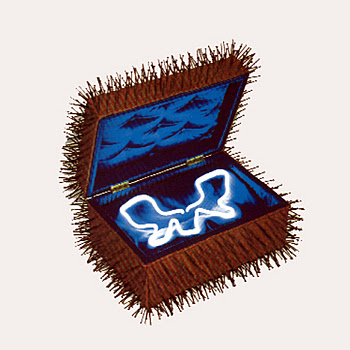 Cud’s last album and by far their funkiest and most commercial.  The actual musicianship is as brilliant as always.  When I was listening to it the other day their was a shout from the lounge, “Is that Thin Lizzy yer listening to?”  The track in question was the opener Somebody Snatched my Action.

It is also the most well produced album.  This does not necessarily mean it is their best album.  It is a more mature, which means that there is no songs about Prawns in Whitby.  The songs do tend to sound the same maybe it was an album too far.  I probably prefer Showbiz to Asquarius, but it is no Leggy Mambo.  That does not mean that it is a naff album, any release by Cud would be above many of the indie also-rans that were about in the 90’s.

My favourite song on Showbiz is Sticks and Stones.  The expanded version has extra sessions and b-sides.  Listen to the b-side of Neurotica, 1 W.G.S.  It sounds like calypso music straight from an Andy Kershaw radio show.

Somebody Snatched My Action
ESP
Waving And Drowning
Sticks And Stones
The Mystery Deepens
Slip Away
One Giant Love
I Reek Of Chic
Not Necessarily Evil
You Lead Me
Tourniquet
Neurotica
1 W.G.S.
My Need To Hurry
Ski Bum
Down The Plug
Here Come The Old Flames
Lighthouse Keeper
Let You Down
Take The Time And Read My Mind
Wanting Isn’t Getting
London Nearly Killed Me

(London Nearly Killed Me is untitled on the CD and not listed, the track name was found on the Cud website)