After the debut album, the Drop Nineteens went through cataclysmic line-up changes and from listenable indie also-rans they suddenly became a grunge outfit not entirely unlike their fellow Boston counterparts The Pixies.  A different line up meant a different sound Greg Ackell and bassist Steve Zimmerman were the only member leftover from Delaware the other 3 had long gone.  The dreamy washes of Delaware were nowhere to be seen and National Coma sounds very raw in comparison.

The Drop Nineteens album that was shelved for some strange reason.  It is rumoured that this was due to the master tapes deteriorating.  Admittedly the recording sounds rough.  This has split critics; some say that the poor sound does not have a negative effect on the recording, whilst others say it makes the record barely listenable.   In my opinion there are some really intense and interesting guitar effects, particularly on Shannon Waves, that really could of done with a decent recording.  But now we live in an age of digital recordings some the days of obscure bootlegs and demos are numbered.  The mystique of bootlegs has been lost, so Mayfield is a trip back to bygone age.

One of the few bands from America, that were in keeping with the very English shoegazing scene. They had all the hallmarks of their British counterparts, lush blurry guitars, almost inaudible vocals and a good dose of distortion. The Boston five piece’s debut album Delaware is quite catchy, with songs such as the classic debut Winona.

The vocal duties are split between Greg Ackell and Paula Kelley, this add to the schizophrenic quality of Delaware. It is often quiet and fuzzy and serenely surreal yet song like Happen and Reber-rymemberer are not unlike Sonic Youth and The Pixies. It also has a cover of the Madonna’s Angel, they take Pop Queen’s song and make it their own. It is a much better than the original. Another quirk in the album is Ease it Halen, which was created by stringing together Eddie Van song titles.

After Delaware hit the shops, the Drop Nineteens sunk largely without trace in the United States. They toured ‘Delaware’ in the UK headlining a tour with Winchester trio Revolver. The shoegazing era was over by the time of the album’s release. They did come back with another album National Coma, but once again failed to break into indie superstardom. They have often blamed former labelmates Smashing Pumpkins and grunge gurus Nirvana for their lack of success.

On a different note. In later reissues of Delaware the girl on the front cover has the gun in her hand air brushed out. 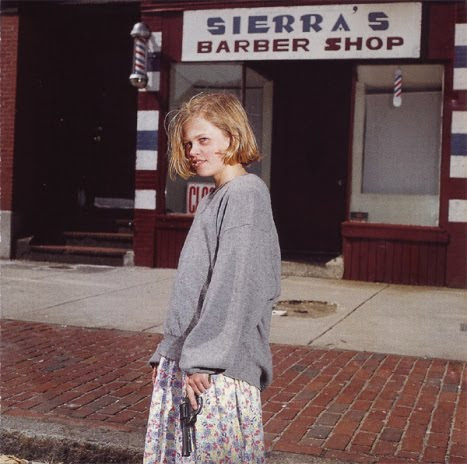