This week I am celebrating the 25th anniversary of my first gig.  It was at the Bournemouth International Centre, Cud were the headline act and supporting them were a local indie outfit called Flood.  They released a couple of EPs in 1991 and then vanished.  Honeymoon Striptease was the second and last EP.  I am told that their biggest gig was supporting The Stranglers in 1991 at Brixton Academy.

After the first post about them, readers have let me know what the Bournemouth 4-piece did after Flood subsided.  Graham Parker went on to write an England football song as the Metatarsals, which has had around 20,000 hits on the internet and was featured on More4 news. Graham also wrote the music for a film about London homeless charity The Connection.

Nigel (Tish) Day went on to produce various bands based out of Switzerland, such as the all girl band, The Delilah’s and  Bianca Story.  Sadly, Nigel died tragically in 2010.

Charlie Bloor was called up by school pal Alex James in 1996.  He collaborated with Alex, Justin from Elastica and Stephen “Tin Tin” Duffy in the short lived Me Me Me.  They had one single called Hanging Around.

As for Collier…couldn’t even find out his first name.

Red Eye
Forget The Whatever
Devastated
Mary And Miles

After all this time I am still no wiser about this band. This EP is from the Bournemouth band Flood. I purchased this after seeing them support Cud. I either read, or was told that the band members met at the Russell-Cotes Museum at Bournemouth.  One of the prospective band members worked at the museum and apprehended a man who he thought was stealing from the museum.  The thief was actually donating items to the museum and they struck up a friendship.  I cannot verify how much of that story is true, but it does sound true.  It was the most exciting thing that happened in the area, since Poole mod/punk band Tours released Language School in 1979

They had another EP called Honeymoon Striptease, but after that little is known about them.  They never even got a mention in any of my tomes, such as ‘The Great Alternative & Indie Discography’ or ‘The Virgin Encyclopedia of Indie and New Wave.’

Flood : Jealousy Comes to the Rescue 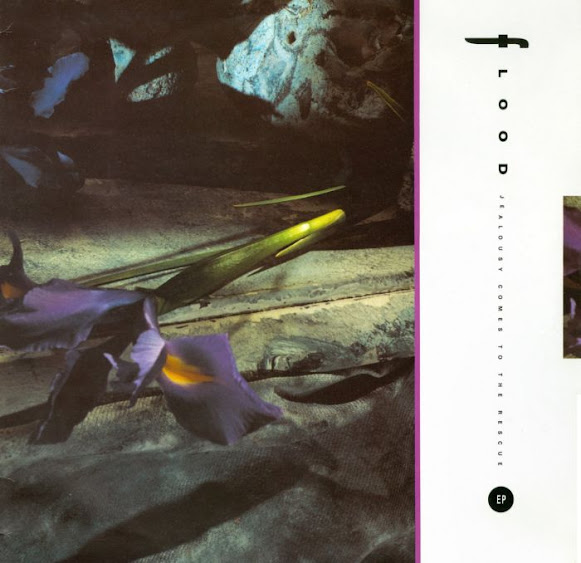