Kingmaker’s second EP and a real scorcher.  The opening track When Lucy’s Down was played consistently at the local indie disco every Saturday from it’s release until 1995.  It is a classic tune and it would be in my top ten tracks to get dancing to.  I first heard the song at the indie disco and had no idea it was Kingmaker.  In the days before Shazam and the Internet if you did not know what the song was you had to ask the DJ, which I did.  So looking seriously uncool I asked, “Who’s this?”

High as a Kite is one of Kingmaker’s longer songs at just over 6 minutes.  It goes through may phases and ultimately builds up to a crescendo at the end.  With Loz Hardy’s signature cathartic vocals, really add to gritty urgency of the song.

The rest of the EP utilises Loz’s energetic vocal style and sounds not too unlike the Wonderstuff.  They did tour with the Stuffies and Miles Hunt did provide the backing vocals on Really Scrape the Sky.  One last fact, when I saw Kingmaker in 1991 at the Joiners, Southampton. Drummer John Andrew was sporting a mohawk haircut, this was really rare in the nineties. 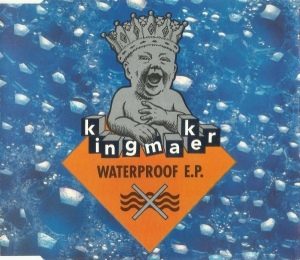 This is a difficult one. There are some great moments on this album, and there is not so good moments too. For me, whenever I hear When Lucy’s Down; I get transported back to a Saturday night at the Hothouse in Bournemouth circa 1992. That song was an indie floor filler. At the time I didn’t know who performed that song, so I asked the DJ, “Kingmaker” he said, and he just looked at me as if I was some cretin. Songs such as Really Scrape the Sky are very catchy and just ask to be sung along with. Freewheeling and Revelation show that there is an abundance of musical talent in the band too. I have a particular affection for Two Headed, Yellow Bellied Hole Digger. Probably because I saw Kingmaker at the Joiners in Southampton in August 1991, on the Two Headed EP tour. I remember that Myles Howell the bassist was sporting a Mohican haircut. This was unheard of in the early nineties.

Unfortunately the rest of the album struggles to be just ok. Loveless/Defamed and the other songs tend to be unmemorable. It might be because I have the US version of the album. The UK version has Wave and Everything In Life instead of Where You Stand and Eat Yourself Whole.