Until the reunion shows of 2008, this was the My Bloody Valentine live recording. Easily the most widely circulated and best bootleg. The definitive Loveless era bootleg. This is a soundboard recording on 4th, July 1992 in the city of Vancouver in British Columbia, Canada.

“I wish I was there.” springs to mind when listening to it, this is My Bloody Valentine at the height of their game. The guitars, bass and drums are all really well recorded, but sound rough, these are Loveless tracks performed in the same way as the debut, Isn’t Anything.

You Made Me Realise, the whole 17 minutes and it becomes apparent why they are so important. It sound like something launching from Cape Canaveral, but shows why they made such a difference to modern music.

You Made Me Realise EP was the first thing that My Bloody Valentine released with Creation Records, before all the animosity with Alan McGee and virtually bringing the whole company down. It is a five song classic that has the jangly pop of Isn’t Anything, the ethereal musicscapes of Loveless, plus the sonic attack of the title track You Made Me Realise. There are mini drum rolls, the feedback and distortion is cranked up. This song is the holocaust section of the live set. Chords are played in repetition at extreme noise level, this sound has been likened sticking your head in jet engine. Midway Still covered the title track, but they did not have the right lyrics. Kevin was quoted saying “They got absolutely all the words wrong except for the words ‘you made me realise..’

The next song Slow deals with explicit sexual content. Moving swiftly on the third song is Thorn is a jangly pop and yet distorted track. Pop melodies are in competition with the feedback. Cigarette in Your Bed is a hazy, dreamy and darkly sinister in contrast. Belinda Butcher sings alone, and it showcases what a great singer she is. The last song is Drive It All Over Me which features all the best parts of the EP. Colm Ó Cíosóig’s drum rolls, Belinda Butcher’s sung melodies combined with a touch of feedback, classic.

On the front cover the girl is holding a knife to her throat. I only noticed this years after I had brought the EP.

My Bloody Valentine -You Made Me Realise

The remastered My Bloody Valentine albums have an album of early EPs.  This does not feature Ecstasy and Wine, the compilation comprising of the Strawberry Wine single and the Ecstasy mini-album, both released in 1987. This is Belinda Butcher’s first appearance with the band.  Her airy ghostly vocals brought a new image.

It shows that My Bloody Valentine were still finding their identity.  They ditched the Cramps goth rock stylings and opted for a more C86 twee jangle-pop sound.  There is plenty of boy-girl cooing at each other in many of the songs.  Never Say Goodbye has the latter My Bloody Valentine feel, and is the standout song of the album.

Clair and (Please) Lose Yourself In Me  have a noisy feel and would eventually lead to the sound that is in You Made Me Realise.

My Bloody Valentine : Ecstasy and Wine

This was one of the EPs that was released before Isn’t Anything, the other was You Made Me Realise. The guitar effects that would become the My Bloody Valentine sound are evident throughout, but it also has the Ecstasy and Wine stylised noise which is more in keeping with their early work. Feed Me With Your Kiss and appears on the album and is the title track, but the others are just as strong. Emptiness Inside was a long standing number in their live set.

My Bloody Valentine : Feed Me With Your Kiss 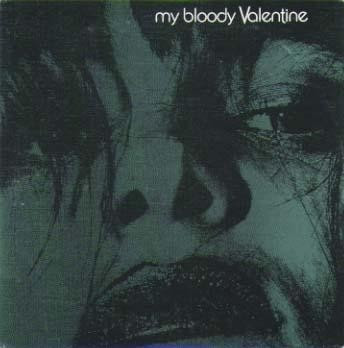