Senseless Things are probably the only band ever to play at Southampton’s Eastpoint Centre,  this is were I saw them on the Everybody’s Gone tour in June 1991.  Homophobic Asshole is the second single from 1993’s Empire Of The Senseless.  It received promising reviews but was released reluctantly by their record company due to the band’s choice of title.   It failed to chart because of this, their last two singles Hold it Down and Easy to Smile made it into the top 20.  I had always thought that this was an early single as it sounds full of punk rage.

The Senseless Things were the perennial support band. This was quite undeserved as they were in fact good. They were for the indie kids who were into the Poppies, Mega City Four or Ned’s, not really for more traditional shoegazers like myself.

I saw them 15th June 1991 at Southampton East Point, strangely they were headlining not supporting. The main reason I went is because there was a lack of good gigs in the area at that time. This was the first and only time I went to Southampton East Point. It was a school, the gig was in the hall. I was seeing a band who had just signed to a major record label, and had the uber cool Jamie Hewlett doing their record sleeves, appearing in a school.  At their t-shirt stand they were selling the classic “Pop Kid” t-shirts too.

The Senseless Things : The First of Too Many 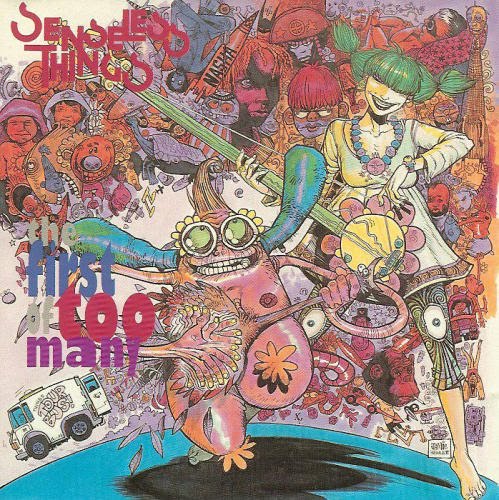 Jamie Hewlett at the time was doing work in a very cool magazine called Deadline this was before doing the Monkey opera which was used by the BBC at the Olympics or the Gorillaz. Cass the drummer from the Senseless Things was recruited into the Gorillazs.

I had this knocking around my computer for sometime, and could not remember where it was from. I rediscovered the site it was from the excellent Senseless Things Fansite, which is sadly no more.  This has most of the obscure recordings and bootlegs in one place.

This compilation is The Things at their most punk and has a cracking version of The Shadows Apache. 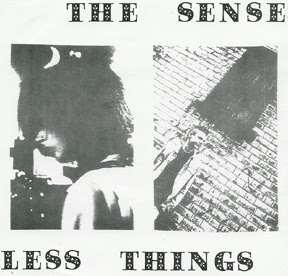 I’m Moving (flexi)
Low Time (flexi)
(All You’ve Got To Do Is) Stay Together (flexi)
All Over You (Sniffin’ Rock)
Keep On Thinkin’ ‘Bout (bootleg 7″)
When You Let Me Down (bootleg 7″)
I’m Moving (bootleg 7″)
All Over You (bootleg 7″)
Legal Lines (Underground Rockers)
Busload To Bingo (Underground Rockers)
Teenage (Shape Of Things To Hum)
Trevor (Disposable But Happy – [speed corrected])
Break It Away (Pssst)
Remember Me (Submerge)
Kiss and Cuddle (Out Of the Blue)
I Must Be In Love (Rev No. 9)
Apache (Ruby Trax)
Keepsake (demo) (Volume)
Too Much Kissing (live) (Glastonbury)
Keepsake (live) (Great Expectations)
American Dad (live) (Progression)

The ill-fated Andi In A Karmann EP, which was never released.  It was set to be released by What Goes On Records, and the company went bust.  The Things went and signed to Decoy records and released Is It Too Late  EP which feature all the songs off Andi with the exception of You Owe Me and Never Know Why. Which is a shame as they are great tracks.

Note the similar record covers of Is It Too Late and Andi In A Karmann.  Jamie Hewlett must of been too busy with Tank Girl to do another sleeve for them.

Andi In A Karmann 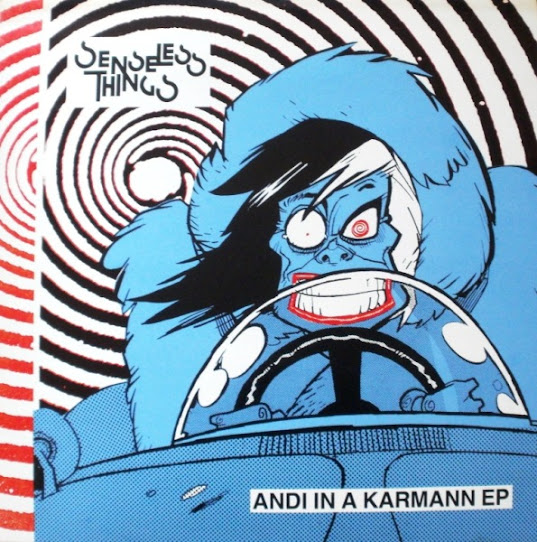 Is It Too Late?
Tracia Don’t Belong
Ponyboy
You Owe Me
You Will Never Know Why