When the Free Machine EP was released; Spitfire looked poised to become massive.  Personally it is my favourite Spitfire EP the exuberant Wild Sunshine was an instant indie disco classic (there’s an oxymoron, if ever I saw one). The raw seventies garage band sound fill Wild Sunshine and Rock and Roll Part Rocks Off Baby, with excessive use of wah throughout. Slide shows a more somber side, but the wah is still there.

This is the debut album by the Crawley retro garage band. I put off having this album for a long time because I had all the EPs. The most impressive songs on the album are from the EPs but just to be a completist I got Sex Bomb too. I prefer the Free Machine EP version of Wild Sunshine, but I think that this is only because I have listened to the Free Machine EP more. The album is one to listen to rather than having the instant exuberance of the EPs. Womb Child on Sex Bomb is a slower more thoughtful, which does suit it better.

I unashamedly love Spitfire but about 10 years ago I was chatting to a band that was part of the early 90’s indie scene.  They told me that while there was much comradery between bands, Spitfire loved themselves a bit too much.  This caused them to be dislikes by the other bands on the scene.

This is a great debut and a much more mature release, but you can thankfully still smell the leather and cigarettes on it.

Another slice of retro rock from Spitfire. It is the type of single that you can almost smell the leather through the cigarette smoke. Fuzzy and raw just how a Spitfire single should be.

At this point in their career, Spitfire had worn thin their ‘Rock God’ ironic image. They were seen as a novelty band by many, which was not a true reflection of their actual brilliance. So swagger over and listen to Minimal Love.

Spitfire’s second album in 1996 saw them submerge themselves further into a retro seventies stupor.  What started in Sex Bomb (their debut album), as retro kitsch wah had degenerated further into raw riffs, panting and openly suggestive.

The influence of The Rolling Stones is not in any way disguised in this release. At the time they were recording this Nick and Jeff Pitcher were DJing at The Basement nightclub in Brighton.  They were playing 60s and 70s garage rock; bands like the MC5, The Stooges and The Ramones.  Which would be a huge influence on them.  I Am The Greatest features a sample for an Iggy Pop live album, this sample is uncredited in the sleeve notes.  There is a hidden track on here which is amusingly tucked away at track number 69 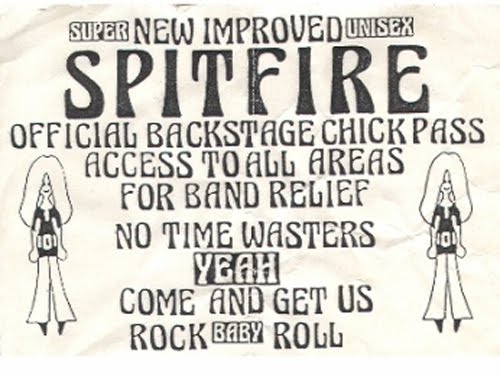 For a very short time my musical life was set alight by Spitfire.  In a very Ride way they released their first two EPs as a mini album. Their music was a retro indie, which is probably best shown in their cover of the theme from ’Six Million Dollar Man’.

They had an ironic Rock and Roll image. This was their downfall. You can have a laugh, but there is taking it too far. When I saw them they had a couple of dancing girls in catsuits that appeared at the beginning and end of the set.

At the time the Spitfire look was very easy to achieve.  If you walked into any charity shop and grabbed yourself a leather hacking jacket, you were there.  This was in the days before the over priced ’vintage’ clothes shops.