After relationships with 4AD broke down Swallow began writing and recording at home. A newly funded Rough Trade records released a four track EP Hush which included a cover of Steve Miller’s Dear Mary.  At this point Swallow briefly toured with Mazzy Star.  The brief hiatus did nothing to inspire interest in the duo, and the Hush EP was poorly received.  Which is a shame as it is good

Louise Trehy’s vocals are haunting and ethereal.  Yet it all sounds very 4AD even though it was on Rough Trade.  It still sounds like the Cocteau Twins which is not going to win many fans, when it was released in 1994.  Everyone was into Britpop at this time and the sound seemed dated.

I was well impressed with Swallow when they appeared at the Joiners, this is what their Myspace page says and it sums up everything.

‘Swallow were the duo of Mike Mason and Louise Trehy. Signed to 4AD, they only made two releases before leaving. A briefly resurrected Rough Trade label enabled them to release a further EP before they disbanded. Swallow were an underrated band who never achieved their potential. Saddled with a replacement Cocteau Twins tag the band remixed their debut album Blow to break down the John Fryer production creating the more interesting album Blowback. After relationships with 4AD broke down Swallow began writing and recording at home. A newly funded Rough Trade records released a four track EP Hush which included a cover of Steve Miller’s “Dear Mary.” At this point Swallow briefly toured with Mazzy Star. In the middle of their album recordings Rough Trade lost their funding and for the second time Swallows recording efforts were in tatters. At this point Mike Mason and Louise Trehy’s relationship ended and Swallow were no more. Mike Mason continues with music and Louise Trehy left the music industry.’ 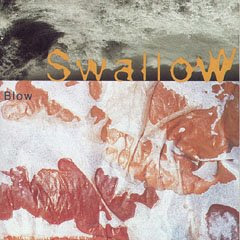 I think part of the appeal was Louise Trehy, she definitely had a look that was magnetising to 16 year old shoegazers. Strangely enough the album cover has a picture of a liver on it.

It’s been over 20 years and I still have a teenage crush on the oh so dreamy Louise, thankfully, she has re-entered the music scene via Strata Florida

The limited edition remix of Swallow’s debut album Blow. It was released in 1992 the same year as the debut. It is not just a companion to the album, it overshadows it. Blowback demonstrates that once the movement away from the John Fryer production took place, a substantial piece of work was created. Fryer is credited as the original producer, but that was before the remixing.

It boasts a dub version of Peekaboo. I never noticed that it was a dub version until I read the CD cover. It is a 4AD version of dub, which sounds like a normal 4AD song with extra echo. Fuzzy guitar instrumental of Tastes of Honey is far superior than the original.