Tomorrow sees the release of Swervedriver’s first album in 17 years.  I am very excited, Swervedriver where unwittingly given the shoegaze label but they were able win over even the most hardcore ethereal, whimsical, twee fans like myself.  So get out there and get it.

Swervedrivers last album that came out in 1998.  It nearly never made it on the shelves as they were dropped by Geffen just before its release.  The independent US label Zero Hour stepped in and the album was released.

This album steps right back into the euphoric washes of guitar effects.  This is straight from the beginning in 99th Dream.  These Times is the catchiest tune on the album, it was always destined to be the single off the album. Electric 77 plods along and is more time consuming than epic.  The 2 minute instrumental at the end livens up the song.

Expressway is a mellow song straight from the parched mid-west, until it breaks into guitar noise halfway through.  The album close with closes with all peddles on full throttle in Behind the Scenes of the Sounds & the Times.

This album requires some persistence with listening, but it is worth it. 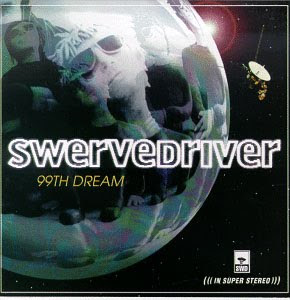 Swervedriver by default were part of the Thames Valley scene, but they fitted a more metal scene. They formed in Oxford (home of Ride), from the ashes of several hardcore groups. Lead singer Adam Franklin had crusty style dreadlocks which made Swervedriver popular with that fraternity.  The subject matter of their songs showed a preoccupation with the American mid-west. Lyrics about pick-up trucks and highways dominated their debut album Raise.