Part of the holy triumvirate Over Rising, Me In Time the Weirdo EP was released. The latter is a Hammond organ extravaganza. This would one of the pinnacle of Rob Collins’ career as shortly after the single was released Collins was arrested for aiding and armed robbery. Collins was charged with armed robbery on an off-licence near his home. He claimed to have no foreknowledge of the robbery, and pleaded guilty to “Assisting an offender after an offence”, for which he was sentenced to 8 months imprisonment.

The EP features the Theme from The Wish. A film that no one has heard of; or was it a film at at all? It is an atmospheric yet kind of groovy instrumental. There is an alternate take on Weirdo which is basically not as good as the original. Lastly the epic Sproston Green (U.S version) which is always a joy.

The high point in The Charlatans career was the time just in between Some Friendly and Between 10th and 11th. The Stone Roses were locked in battle with Silvertone Records and the Happy Mondays were on course for self destruction. At this time The Charlatans seemed to be the brightest hope.

Over Rising grooves around the organ and piano chords. With some great guitar sounds thrown in. The whole delivery is laid back and funky, including Tim Burgess’s vocals. In contrast Way Up There, shows that Tim’s vocals have much more range and feeling. This song is built around the drums rather than piano and organ.

Happen to Die really stands out to me as a catchy song. I am not sure why? I think it is the way it builds up with the lyrics adding tension. Then when it gets to the chorus it sounds really cheerful, despite the serious message.

Opportunity Three is Flood’s reworking of Opportunity. A heavily layered baggy, ambient and psychedelic
song. It is a big tune that rises and falls for over 7 minutes. The EP shows that The Charlatans had settled
and had become more distinctive with their sound, and become groovier at the same time.

The Charlatans : Over Rising

Over Rising
Way Up There
Happen To Die
Opportunity Three

Originally a bootleg that was recorded live at Chicago Metro Feb 21, 1991.  It was then officially distributed as vinyl only release through the fanclub, limited to 1000 copies.  The original vinyl version was on the Live Live Good label.  The CD was issued by Polygram in Canada.

The recording quality is good, but Tim Burgess’s vocals are frequently stray.  So what is good about this bootleg?  It is The Charlatans at the height of their game.  Just after Some Friendly and before Between 10th and 11th, they had the world at their feet. During this time they released Me. In Time, Weirdo and their finest single Over Rising.  The Stone Roses were locked in court, and the Happy Mondays were on a downward spiral.  It was The Charlatans that were leading the field now.

Imperial 109
The only one I know
Not very well
Believe you me
Then
Happen to die
Flower
White shirt
Indian rope
Opportunity
Sprosten green
10th and 11th.

The Charlatans debut release, after a limited-edition EP almost similar to this one sold only at shows. It was released on their own Dead Dead Good record label.  It was shortly after they were snapped up by Beggar Banquet which is an offshoot of Situation Two records.

It was re-released in August 1991.  I seem to remember someone at school told me that The Charlatans had withdrawn the single from the charts. They just wanted it to be available to stop bootleggers.  Upon recent research the single charted at 57, back in 1991.  Now I’m unsure, why I was told it was not entered into the charts.

Burgess’s vocal are much more definite in their first single, and they are at the forefront of the production. Indian Rope is driven by Collins’s Hammond organ and some excellent drumming.  Who Wants to Know sounds like a sixties psychedelic Hammond freakout.  It’s important to remember that this was right at the beginning of the baggy scene, and nothing really sounded like this at all. 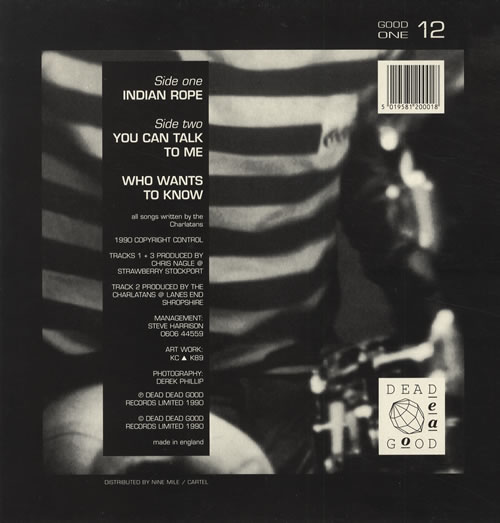 Indian Rope
You Can Talk To Me
Who Wants To Know