Obviously everything that is included in this blog is criminally underrated but with three singles to their name Thirty Five Summers get barely a passing nod.  The only reason that I knew of Thirty Five Summers, is my girlfriend in 1991 had this single.

It is a shame that more is not written about them.  I read a very interesting article  a few year back about them.  It included stories of excessive drug use, mismanagement, fraud, backhanders and internal wrangling. But I can’t remember where this was from and can’t find the story.  The only other thing that I can recollect is the lead singer looked like Malcolm McLaren.

They did have support slots with Northside and EMF, but disbanded before their debut album Sketch appeared.  This album was shelved and never saw the light of day.

I Didn’t Try is a baggy indie dance anthem. That makes you want to dance. 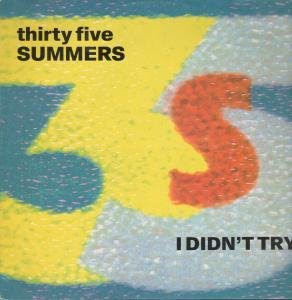