Mappamundi is unlike the debut and anything else that they did before. It became the quirky Slough Student shoegazers parting shot. They would of undoubtedly carried on if the album had been a success, and if the album wasn’t so poorly received they would not of been dropped by Polydor.

Despite having a huge live following, they had become complacent after early success. Mappamundi lacks the freshness and spontaneity of early work. The content is a psychedelic journey rather than dealing with everyday quirks, Their quirkiness was epitomised by the classic 0-0 A.E.T. (No Score After Extra Time). It was definitely a new direction for Thousand Yard Stare and I think that was very brave. Just think if My Bloody Valentine never experimented with reverse reverb and soundscapes, they would be just a second rate Marychain clone.

Version Of Me
God’s P45
Tragedy No. 6
Debutante
One And All
Sooner
Halfsize
Small Change
Monsieur Bour And His Goat
Naturesway (Earthwatching)
What’s Your Level ?
Downtown Mystic

This EP came out just before the debut album Hands On.  The lead song Comeuppance is not the usual catchy pop and singalong fare that fills that Thousand Yard Stare were renowned for.  It has a languid rhythm and Stephen Barnes swops his ‘cheeky chappy’ vocal style to a more serious tone.  Comeuppance is one of the few songs that is proper fringe wagging shoegaze from Thousand Yard Stare.

The other tracks are really good too. This is what Mappamundi should of been like.  The last track Standoffish ends suddenly.  Sounding like you are lifting the tone arm off the record before it has finished.

I am talking about the Slough band not the band from Phoenix. Their home town status qualified Thousand Yard Stare to be part of the Thames Valley scene. The students loved them and they all looked like students. Long sleeve t-shirts and fringes. I had seen them a few times and was the proud owner of a ‘Stifled Aardvark’ t-shirt (see picture). Stifled Aardvark were the Thousand Yard Stare’s record label.

You could singalong to their songs and they were so catchy. Hands On the debut album is brilliant. A delightful blend of jangling guitars, catchy riffs and lovely melodies  More pop than the other scenester of the time. Buttermouth was a floor filler.

It is quite irritating to buy an exclusive 10” clear vinyl EP only to find that it has exactly the same tracklisting as the CD single.  Then comes the realisation that you have to by the other limited edition EP to complete the set.

It’s a good job that this EP was worth it.  Wideshire 2 is a slightly slower and quieter version of Wideshire.  Hand, Son has a wriggling noodling guitar riff, which Thousand Yard Stare were partial to.  Moccapune E.P is an instrumental of Comeuppance. 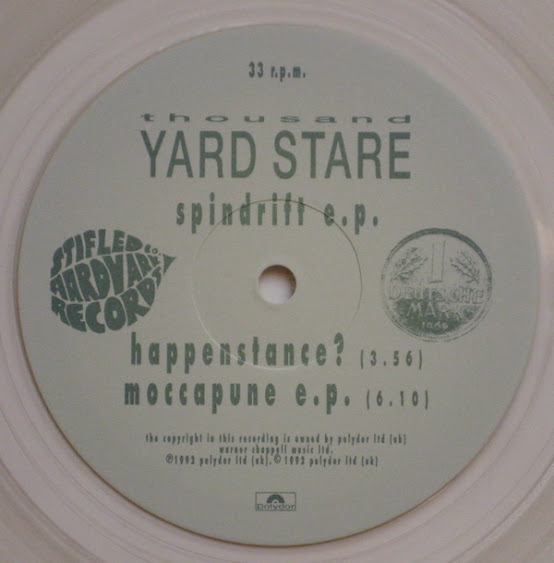