World of Twist was formed in Shefield in 1985 by guitarist Gordon King and singer Jamie Fry, the brother of Martin Fry of ABC. They relocated to Manchester and rode on the explosion of new bands in the area on the baggy wave.

The 1989 version of World Of Twist featured Tony Ogden (vocalist and co-songwriter), Gordon King (guitar and co-songwriter), and Andrew Hobson (synthesizers), Alan Frost (visual eeffects, synthesizers), featuring the statuesque Julia McShells aka MC Shells (swirls and sea noises) and Angela Reilly (visual effects). Nick Sanderson (drums) joined some time later. The music press revealed that some band members had amusing occupations before they joined the band. These included an Royal Marine and Magicians Assistant. There was a Roxy Music, Human League feel to their music. Tony Ogden was a very charismatic frontman, sort of Leonard Rossiter meets Elvis. He tragically died in July 2006, aged only 44. Their live shows were a spectacle, MC Shells would appear onstage in a shell. Tony would be wrapped in tin foil and would break free during the first song. They would play in front of a revolving wheel. The reissued album features the Stones cover, She’s a Rainbow. This was one of the last songs produced by Martin Hannett, before his death. 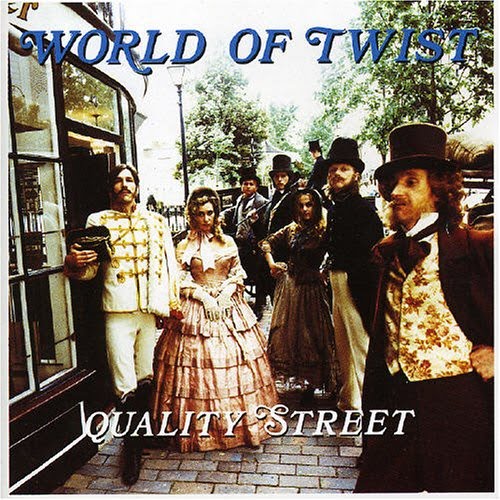 More recently artist Jeremy Deller was asked to create something for the Manchester International Festival.  He chose a procession to celebrate the World of Twist. He advertised for fans to take part in the procession.

Not content with just calling their debut album Quality Street, they have named even named one of their singles Sweets.

This CD single features mixes of the songs on Quality Street. Sweets in a lovely saccharine song that could’ve been written for Saint Etienne. My favourite is This Too Shall Pass Away (Chat), on this track the vocals have been completely stripped away and replaced with samples of people talking about garden sheds and Norman Wisdom.